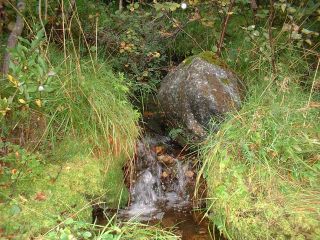 It’s important to drink often. If you loose 3% of your bodyweight in water, your efficiency drops 20%.

With hard physical labor one needs even more.

It is also important to drink enough in winter time, drink the same amount as you would do in summer, and make sure most of it is hot.

Always remember to keep your Water bottle on your body in winter or it will freeze.

Hang your canteen around your neck and keep it under your clothes.

Small creeks are pouring down the mountainsides every mile or so, at least on the mainland.

It also rains frequently and if you have some piece of tarp/cloth or waterproof a container one could easily collect several litres of rainwater.

Avoid any water-source found lower than the houses in a populated area.

Be careful when choosing water Source in years With a big lemming/mouse population.

If you want to be on the safe side, boil the water. 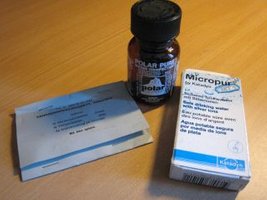 To be on the safe side or you suspect the water to be contaminated; bring the water to a roaring boil. This should be enough to kill all germs in the water. It consumes less wood than the old 10-20 minute rule. And it’s easier to do when cooking in a pit with hot stones.

5-6 drops of tincture of iodine in a litre (quart) of water, 10 drops if the water is cloudy. Let it sit for 30 minutes. This is due to the cold water found in our creeks. If the water is 15 degrees Celsius or more it is enough with 15 minutes. The water taste of iodine, but not more than that you`ll drink it if needed. There is a commersial product as well, called Polar Pure (iodine crystals). I don`t know if its available anywhere in Norway but it can be purchased from the US.

Micropur Forte (the only one I`ve tried) tablets can be bought from the farmasies.

One pill cures one litre (quart) of water. Time before drinking is 30 minutes.

If giardia is present it may take up to 2 ours.

The water is tasteless after curing.

Waterfilters are becomming smaller and cheaper, making them more userfriendly for the camper.

I have bought a Sawyer Mini, and it doesn`t weigh much nor does it take up much room.

And It is said to filter out most nasties and a large amount of water as well; 100000 gallons they claim.

Taken from the Sawyer web page:

Eating raw snow may cause hypotermia.

Melt snow in hand or in a can over fire.

When melting snow in a can or coocking pot, don`t just fill it full of snow and hang it over the fire.

Make a snowball and trow it in first, when this is melted add more snow.

This is more efficient.

And it`s less likely that your pot boils dry and that it is destroyed.

A closed container filled with snow and stowed in the sleeping bag will produce drinkable water overnight.

Fill the half full water bottle with snow and store it under your clothes, the body heat and water will melt the snow.

Repeat the procedure when necessary.

Don’t use the uppermost layer of snow as it may be contaminated from human waste when it drifts around with the wind.

10 litres of loose snow yields only 1 litre of water.

Therefore if one has the chance, melt pure ice to obtain water.

The small pot below is filled with ice ready to be melted on the fire. 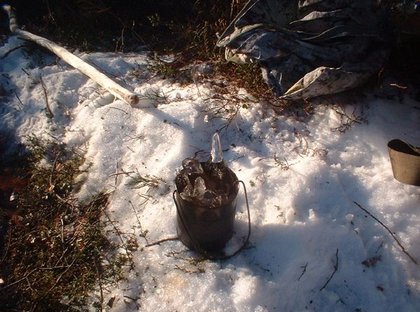 My advice is to brew tea from it, to make it more drinkable.

You could also whisk oxygen into it in a bowl or other suitable wessels. 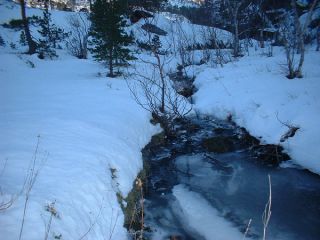 In winter running water can be found near or on marshes.

Sometimes it pays off to chop a hole in the ice to get to water.

If the ice is no thicker than 20-30 cm it is manageable with an axe. 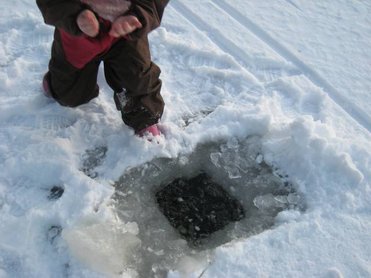 Old ocean ice has little salt, as do melted water on it`s surface.

In spring scoop it of the ice.

Remember that sea ice can be very weak and hazardous.

Icebergs are salt free. (And extremely rare along the Norwegian coastline, as in never heard that anyone have seen one)

Salt water kills 1 or 2 days faster than no water at all. DON`T DRINK IT!! 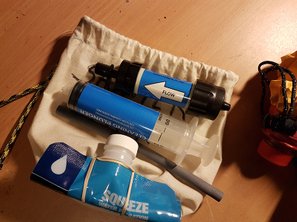 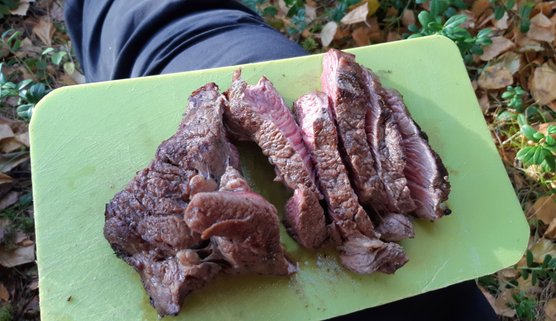